Well, it's not going to be ALL day, but I have an appointment with my primary care physician, Dr. B, at Ft. Belvoir this morning in about an hour, and another with Doc Laredo the Cutter of Veins this afternoon at 1. I'll get a couple of sets of test results and see how the tests turned out. Lots of driving ahead.

Just about everything is now rolling with Plan C. I am registered with the City of Alexandria, have opened an account at Suntrust for Foxchase Accounting Services, have picked up business cards and have more on order, the domain and website are in process with Windstream, and tomorrow morning I'll be going to Springfield for a First Friday networking breakfast. I am optimistic and trying hard not to be manic about this, which is a bit hard when everyone who sees the business plan or who has heard the (developing) elevator pitch thinks I have a Million Dollar Idea.

The less said about the Nationals' recent travails against the "depleted" Phillies, the better.

The old second-hand plasma monitor died Tuesday night, so I wound up going down to Staples (where I had to pick up some cards for Friday anyway) and picking up an HP 20" LCD for cheap, even before the $5 coupon. It's a little scary; at the recommended 1600x900 resolution, I can almost see into the future, or maybe as far as Russia. The built-in speakers suck, unfortunately, and there's no room left on the desk's shelf to put the old Gateway speakers. I'll figure something out, or just wear the headphones a lot.

gohanvox for tipping me to a sweet deal on Amazon: Rush's Clockwork Angels for $0.99. It's sounding pretty good so far, and not just because of the price.

And now I need to get cleaned up, dressed, and head down I-95.

I don't really have a lot to say about this. The company has been well-known for their corporate/Christian values for some time, and has done rather well while doing considerable good, for values of "good" which some of my friends on the Left get rather hot and bothered about. What really seems to have pissed off most of the people who stood in extraordinarily long lines in miserable weather or endured equally long lines at the drive-through was that a number of politicians had the poor taste to act like they'd never heard of the First Amendment. This offended a lot of people who honestly could care less about the issue of gay marriage, and so we had what we had here (and pretty much everywhere there was a Chick-Fil-A) yesterday. Me, I generally avoid the place; what they sell is not, for the most part, good for me or my pancreas, and I am engaged in an ongoing life-and-death struggle with my appetite over who's in charge here.

I will say that I am not impressed by some friends' citation of the SPLC as an authority when it comes to defining what a "hate group" is. Morris Dees has become infamous for running a nakedly partisan outfit that pretends the South and Midwest are chock-full of violent, misogynist, Bible-thumping, gun-loving, homophobic types and don't even get them started on the white people which only the SPLC's vigilant eye prevents from staging a rerun of the War Between The States. They deserve to be taken about as seriously as the TSA, Benny Hinn, Homeland Security, the New York Times, Creflo A. Dollar, or any other bunch of lying thieves.

Finally, whatever side of the issue you may be on, you have to admit this is pretty funny. 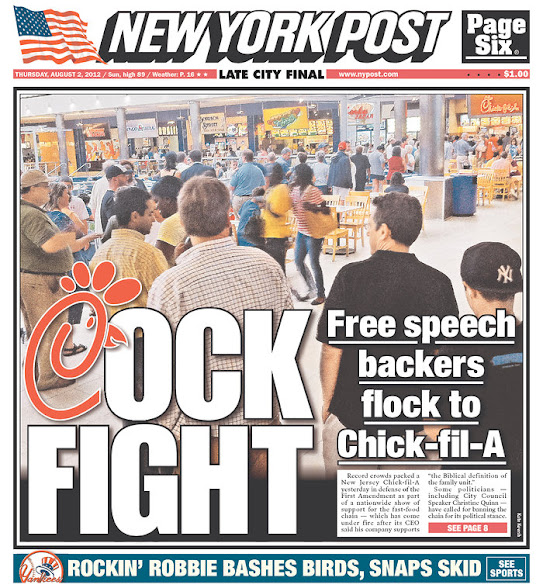